Church Renewal Starts with the Neighbors

The Rev. Audra Abt, Missionary Vicar at the Episcopal Church of the Holy Spirit in Greensboro, North Carolina, and a 2015 ECF Fellow is all about “helping bridge the more traditional church and what will be the church of the future.” Her path to that vocation took her from environmental studies at Oberlin College to Brazil, where a study semester in the Amazon showed her that she “loved to be in that place.” She returned for a year after graduation as an international volunteer, helping to develop an English studies and local volunteerism program in Capim Grosso, a small, rural town in the Brazilian state of Bahia.

Priestly vocation and vision for ministry

Abt had grown up in the Roman Catholic Church and attended Catholic schools. “As a girl,” she says, “I was interested in the sacramental life.” That interest was rekindled in Capim Grosso, where she became involved with a Christian base community and saw people worshipping in homes, engaged in leading prayer, Bible study and the work of the church. She saw women serving in more sacramental roles than in the church of her childhood. At a local Jesuit discernment house, Abt taught yoga and in exchange, they allowed her to sit in on theology classes and discussions.

When she returned home, a friend invited her to attend a service in an Episcopal Church, and her journey to a priestly vocation began in earnest. She completed her MDiv in 2010 and was ordained a priest in the Diocese of North Carolina in 2011, where she worked part-time on the bishop’s staff and as part-time associate rector at St. Andrew’s, Greensboro.

It was there that her proficiency in Spanish and Portuguese, her interests in home and community-based ministry and serving North Carolina’s immigrant Latino/Hispanic communities moved that vocation as a bridge to the church’s future a little further along.

From area missioner to vicar 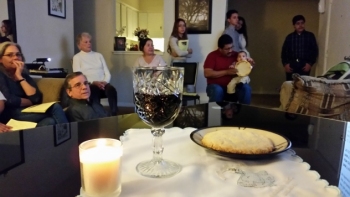 In 2013, while serving at St. Andrew’s, Abt began work as an area missioner, coaching eight or nine congregations in missional community development. That role gave her an opening to start the house church that has become Puerta Abierta (the Open Door Church), a Latino ministry that operates within the greater Greensboro community. She says that it made her heart sing when she saw how the Central American immigrants in the community around St. Andrew’s responded to this new offering. “They wanted to worship in a way that was comfortable for them and to bring their friends along into it,” she says. She was surprised and grateful when English-speaking members of St. Andrew’s began coming to the monthly Missa, and friendships developed despite the language barrier.

Holy Spirit was one of the churches Abt was coaching in her missioner role, and when the congregation’s part-time clergy leader retired in 2017, she was eventually called as their next vicar. She had noticed that the members of this multi-ethnic congregation were more open and unabashed about going out into the neighborhood and praying with people. “They have a missionary spirit,” she says, “and are interested in expanding their ministry in the community.”

She thinks that Holy Spirit would be a good place to base Puerta Abierta, offering what would be the only visible ministry with the Latino community in that part of Greensboro at this time. “Our members from the Caribbean bring a sensibility that privileges home or outside the building as ways of doing church,” says Abt, “so it’s not a huge leap to ask them to become leaders in hosting prayer meetings and inviting their neighbors.” While there may be some language barriers as they work toward connecting the ministries of Puerta Abierta and Holy Spirit, she thinks this openness to being church in the community will help build bridges for shared leadership and ministry. 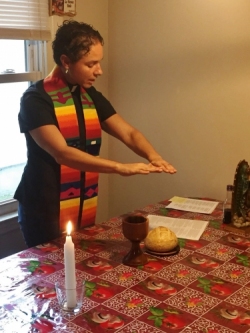 Abt’s work with the members from Central America during her time at St. Andrews’s has made her more confident about asking people to do things outside the church walls. “Members from the Caribbean and West Africa at Holy Spirit have been open to this, and I’ve encouraged their leadership as we draw more U.S.-born members into ministry in streets and homes. They organize prayer walks and all night prayer meetings. They not only have a sense of what they want to do, but also what their neighbors might respond to. Their ability to invite their neighbors in and create spiritual spaces in their homes has drawn folks who might not come to a Sunday service.”

Bridging Holy Spirit’s past and its future

Reaching out to the community is a return to Holy Spirit’s roots. The church was planted as a neighborhood church 35 years ago. There were not so many immigrants in the church’s neighborhood then, but now they are bringing new energy. “Seeing that,” says Abt, “even the parishioners who are tired or unsure are also excited. When we have community cookouts and fairs there’s a joy at being there and meeting neighbors. She hopes to redevelop what was a dying congregation and renew the ministry around the church. “There aren’t many safe, public places to gather for free in this low-income area, and we could create a healing center for wellness and community life on this site.”

Her goal right now is to build relationships and invite the core members of Holy Spirit to think beyond Sunday morning. “There’s an element of leadership that the priest has,” she says, “but it’s different when you you’re working out in the community and everything is not as structured as in a Sunday service. I’m learning to watch and discern the Spirit and to recognize the micro cultures in the neighborhood, to see the spiritual flow and discern the gifts. It’s messy but it’s also beautiful.

“Being in ministry is not just about doing things we know are going to go well –that’s never guaranteed anyway – it’s something a little more amazing than that. We don’t do programs at Holy Spirit, but we’re trying to set as many tables as we can (both metaphorically and literally) and seeing what happens when interactions are the main focus. It feels like throwing myself at the feet of the Holy Spirit and inviting others to do it with me. People are yearning for an experience that isn’t so curated and micromanaged. They’re open to being surprised by themselves or by someone else.”

Abt is grateful for the support she received from her ECF Fellowship. “By adding to the funding package, ECF allowed me to focus my time on my work, while helping connect me to others, who are also building bridges between the institutional church and the things forming out in the world of the church.” Conversations with colleagues in her position and in dioceses that are ahead of hers, have boosted her confidence. “It may feel like a fight sometimes,” she says, “but the church is trying to learn, and we’re all wrestling with this together. It’s always going to be incomplete on this side of the restoration of all things in Christ, but it’s worth it to try living more boldly and lovingly together for the sake of something new that God is doing.”