The Rev. Ken Brannon, rector of St. Thomas Episcopal Church in Sun Valley, Idaho, values process. “I believe that good process can put you in good stead down the road,” he says. And in 2016, almost ten­ years into his ministry there, he thought it was time for the congregation “to weigh in on who we are, where we’re going, and what we’re doing.” After interviewing several possible consultants to assist in a broad visioning process, the vestry chose Erin Weber-Johnson, Senior Program Director for Strategic Solutions at the Episcopal Church Foundation (ECF). “We liked her,” says vestry member Georgia Stewart, who would serve on a small team that coordinated the effort. “She was clear from the beginning about what the process would entail.”

ECF’s strategic visioning process takes six to nine months and is customized to fit the church or organization with which they are working. It begins with a listening process involving the entire community. From the material gathered in that phase, a set of three to five core values is developed. Once the core values are approved by the vestry, a strategic filter is developed and applied to create five to seven goals for following year.

Erin’s work with St. Thomas began with conference calls in the fall of 2016 to work with the planning team and vestry to develop a set of questions for the listening phase of the process. That phase would include large and small gatherings for the various communities connected with St. Thomas, as well as an online survey. The rector was deeply committed to including everyone involved in St. Thomas’s life and ministry. Erin remembers Ken saying that they needed to hear from the staff, outside groups—all voices—to be successful in this effort. “It was a healthy process,” she says.

Gatherings of all sizes, held later and led by Erin, gave the people and communities involved in St. Thomas’s life and activities the opportunity to respond to the questions developed earlier. This phase generated energy in the congregation—and a good deal of respect for Erin. “Beyond her good skill set and wisdom, she’s lively and has a great sense of humor,” says Ken. “Everyone enjoyed working with her.”

Erin gathered up the data from the meetings and survey and analyzed it before returning to Sun Valley for a second site visit in May 2017. Her analysis was used at a two-day vestry retreat that created five clear and concise core values that reflect what was communicated in the listening phase. “We couldn’t hit every single idea that was generated,” says Ken, “but we tried to let everyone know that they’d been heard.” 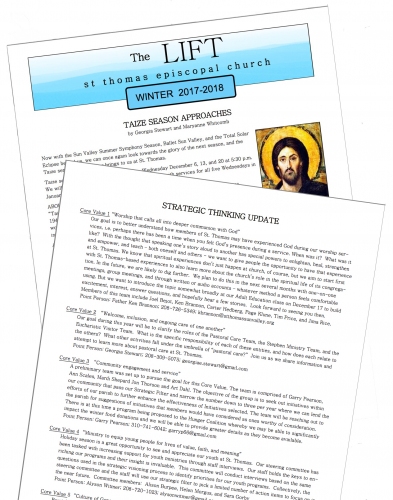 The vestry retreat was followed by a joint meeting with vestry, staff and clergy to put flesh on the core values and to come up with goals for the coming year. That goal-setting work involved strategic thinking, and for that they needed to hammer out a set of objective criteria, called a strategic filter, to bring to decision-making. Once that was in place, they were able to name six goals aligned with the newly named core values.

Prayer is woven throughout

ECF’s Strategic Solutions process is always about what God is calling us to do, and the process is grounded in spirituality. “We began and ended with prayer or devotion always, no matter what kind of a session,” says Georgia. “And we always had it in our minds that the Spirit was working and that this was holy work.”

Moving ahead on annual goals—and building in accountability

Ken compares St. Thomas’s work with ECF to building a house. He feels they had a good frame to work with when the process ended, but there was a lot to fill in. After a well-deserved summer break, the planning committee reconvened at the end of August 2017 to put together implementation teams. Each member was assigned a core value and gathered its own team, tasked with reviewing the progress made on their value’s annual goal. They will report back to the congregation in May.

Ken sees these implementation teams as a significant way to build in accountability so that St. Thomas’s strategic visioning doesn’t end up on the shelf. His group is working with Core Value 1—Worship that calls all into deeper communion with God. The annual goal approved by the vestry in June of 2017 was to “seek out and gather stories of ways that members have experienced God in worship,” work that began with a parish-wide forum in December 2017, where individuals talked about how they’ve encountered God at St. Thomas.

Georgia is working with Core Value 2—Welcome, inclusion, and ongoing care of one another, and its goal is “to strengthen pastoral care through Eucharistic Visitors and Stephen Ministry.” She’s put together a small committee from Pastoral Care, Eucharistic Visitors and the Stephen Ministry and says that their work is well in hand for their report in May.

Bringing the big picture into focus

Georgia feels that St. Thomas’s strategic visioning work with ECF helped her and everyone in the congregation to see the big picture. “We all get so accustomed to the things we do and have to do that we lose sight of or miss how special St. Thomas is,” she says.

Ken finds it interesting that ECF’s Strategic Solutions process impacted so many things at St. Thomas. It’s helped build trust and encouraged giving. The staff feels supported and encouraged, no longer like they’re doing it all alone. “And what’s been fascinating,” he says, “is how outreach awareness is growing.” People are talking about hunger, mental illness, other issues. “It’s opened up what outreach is supposed to be,” says Ken.

Looking back, he says, “It was affirming that we were not focusing on deficits or other issues, but asking instead, ‘what are we doing for the sake of God’s kingdom that we can celebrate?’”

ECF’s Strategic Solutions is there for congregations of all shapes and sizes. “Some places feel like they have to have all their ducks in a row or have a lot of money,” says Erin. “It’s actually far more economical and takes less time than you might think. We work with congregations wherever they are. You don’t have to have a large endowment or organizational structure.”

She is convinced that achievable annual goals, aligned with a congregation’s core values, are more effective in this time of rapid and unpredictable change than the old longer term strategic plans. She hopes that the churches they work with will never need to create another strategic plan. “We train them how to fish,” she says.