How do we live as Christians in the world today? How do we engage other religions in meaningful dialogue and work together to build just societies? Dr. Lucinda Mosher, a moral theologian in the Anglican tradition and a 1999 ECF Fellow, has written, taught and worked with Episcopalians and people of many religions and cultures to help us see the beauty of the world’s religions and to give us tools build a more just and peaceful world with people of other faiths.

Interfaith work begins with our own tradition
Mosher believes that as Episcopalians, we need to be confident in our own faith before we can engage in meaningful conversation or action with people of other faiths. “It is because we are Christian, and not in spite of being Christian, that we can love our Muslim neighbor,” she says. “And for our Muslim neighbor, it’s because she is Muslim that she loves me and is willing to work with me to make our neighborhood a better place.”

When she entered General Seminary in 1996, eager to enter more deeply into Christian-Muslim studies begun during her M.A. work at Hartford Seminary, Mosher’s advisor told her, “‘You’re not here to become a better instructor in the world’s religions. You’re here to become an excellent Christian theologian, so you’ll have something to take to the table of dialogue.’”

“She was absolutely right,” says Mosher. “It’s important that we be able to give an account of the truth that is within us as we understand it, that we are able to answer other people’s questions about who we are and not be dismissive of core doctrines that may be difficult to explain, and that we delight in our own heritage, just as we suspect others delight in theirs.”

She sees the Baptismal Covenant as a good place to begin. “There’s so much there that can help us remember who we are, whose we are, and how we are to be neighbors.”

Learning about other faiths is key
Along with firm grounding in our own faith, Mosher sees the need to become religiously multilingual. “We need to be able to talk with some honesty and knowledge about other people’s religious commitments in their breadth. We’re aware that Christianity is a very big umbrella and that there are people under that umbrella whose beliefs and practices are very different from ours as Episcopalians. It’s the same thing with Islam and Hinduism and Buddhism and all the other isms that you can point to. There is diversity. There is complexity.”

Learning about other religions is a necessary step in developing that religious multilinguality. Mosher’s Faith in the Neighborhood series considers questions we may have about the many faiths that surround us in America. How do Jews, Muslims, Hindus, Jains, Buddhists, Sikhs, Baha’i, Zoroastrian, Afro-Caribbean, Native American, Confucian, and Shinto peoples pray? What rules and rituals sustain their communities? How do they see the purpose of their lives and deal with illness and death?

She remembers a video released a few years ago, A Jew Is Not One Thing. “I think we need documentaries like that on Islam and Hinduism and Buddhism and everything else, too,” she says, “because a Muslim is not one thing and there is not a one-size-fits-all description of Hinduism.”

An unconventional career path
Mosher’s post-doctoral career as a theologian hasn’t evolved quite the way she imagined. “The single job, the chaired position, that one thing that I’m supposed to get up and do each day, never happened,” she says, “but I’ve come to realize that that is not necessarily a bad thing.” She sees her professional life rather like the patchwork quilts her grandmother made.

And like the quilts she remembers, Mosher’s professional life is both rich and useful. Her current work includes teaching ecumenism and interfaith relations in a new Master of Theology program at the Seminaire de Théologie d’Église Épiscopale d’Haïti and online courses at Hartford Seminary, where she also offers intensive seminars in multifaith chaplaincy. As a consultant for SCUPE (Seminary Consortium for Urban Pastoral Education), she assists in developing training programs for leadership in religiously diverse contexts. She also serves as Assistant Academic Director for the Building Bridges Seminar, which brings Christian and Muslim scholars together each year for dialogical scripture study. 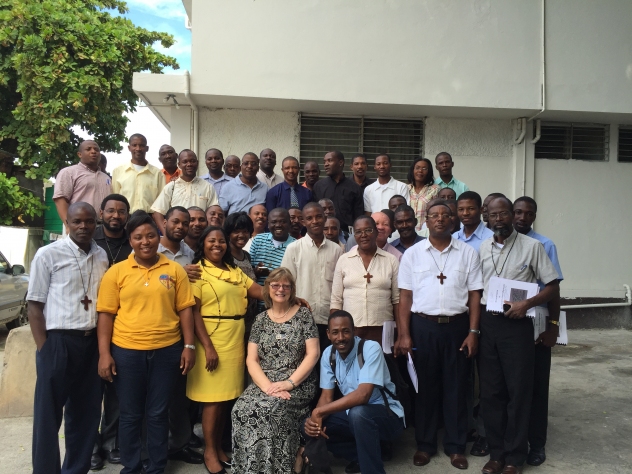 Her work with parishes, dioceses, and other organizations runs the gamut from a religious diversity workshop for prison inmates to a recent three-day conference for the Society of Companions of the Holy Cross on strategies for our religiously complex neighborhoods and world. Her publications include Toward Our Mutual Flourishing: the Episcopal Church, Interreligious Relations and Theories of Religious Manyness (Peter Lang, 2012). And this fall, Mosher revisits her former profession as a church musician to serve as director of music at St. Mary’s Episcopal church in Green Cove Springs, Florida.

Church leadership today
Mosher’s commitment to interfaith education and action and her breadth of experience give her a unique perspective on church leadership. Four things she believes leaders at all levels in the church should be doing:

Helping transform the church and its leadership
Mosher is grateful for the ECF Fellowship that helped her complete her Th.D. Like the two hundred plus scholars and ministry leaders assisted by the Fellowship Partners program since 1964, she has gone on to strengthen the life and ministry of the church in the world.

In Matthew, Jesus compares the kingdom of heaven to “yeast that a woman took and mixed in with three measures of flour until all of it was leavened.” Mosher’s work is yeast indeed, leavening the voice of the wider Church and showing us how to be good neighbors in a multicultural, interreligious world.